Text Encoding: The Thing You Were Trying to Avoid

内容简介：Programmers tend to treat text encoding like the office bore. You weren’t planning on a 2-hour conversation about your co-worker’s lawnmower today? Well too bad, because it’s happening now. Text encoding is much the same, it’s always around, but we’d rathe

Programmers tend to treat text encoding like the office bore. You weren’t planning on a 2-hour conversation about your co-worker’s lawnmower today? Well too bad, because it’s happening now. Text encoding is much the same, it’s always around, but we’d rather avoid it. From time to time it pops over anyway to mess up your day and fill you in about the latest nuance between a code point and a character, or something equally dull. I used to pay about as much attention as that thrilling tale of a recent blade height adjustment.

But I’ve been tinkering with text encoding lately, and it’s not really so awful. In fact, text encoding can be interesting. Not quite fun, let’s be honest, but definitely interesting. UTF-8, in particular, is elegant and well designed. If nothing else, text encoding is everywhere and you can’t avoid it forever, so we might as well try to understand it.

ASCII is an obsolete 1960s-era character set. Or, at least, it would be obsolete if it weren’t extended multiple times. ASCII only has 128 characters. Just enough for English, and some teletype control characters. ASCII characters fit in one byte, so the “encoding” is simple: store the character code in a single byte. This is terribly convenient. Bytes are characters, characters are bytes, and no one talks about code points.

As an added bonus, since computer memory comes in 8-bit bytes, not 7, there’s a leftover bit. It could be used to extend ASCII with another 128 characters. After all, there are people in the world who don’t speak English and would like to see their own language on the screen.

These extended ASCII character sets were eventually standardized as ISO-8859. ISO-8859-1 covers English and most Western European languages. ISO-8859-5 covers Cyrillic. ISO-8859-6 is Arabic. You get the idea.

This system at least allowed languages other than English to be represented. But you had to pick a character set and stick with it. You couldn’t just throw a Cyrillic or Greek letter into your English document. And this system would never allow enough characters for Chinese, Japanese, or Korean.

Unicode is an effort to define one character set for all the world’s characters. When Unicode was first being planned it was clear that it was going to be huge. One byte was obviously not enough, so a second byte was added to allow for 65,536 code points. That probably seemed like enough at the time. That two-byte encoding is UCS-2.

It’s a simple scheme, to encode it you write the Unicode value in a 16-bit word:

Run that, and you’ll probably see this:

Intel architectures use a little-endian byte order so I get 48 00 . If you run it on an IBM mainframe or an old Motorola processor or any other big-endian machine, the bytes would be reversed: 00 48 .

If text always stays on the same computer this is fine, but if you want to send text to another computer it has to know that you meant U+203D (‽) and not U+3D20 (㴠). The convention is to write U+FEFF at the beginning of a document. This is the “byte order mark”. A decoder knows if it sees FF FE to use little-endian, and if it sees FE FF to use big-endian.

Of course, if you want to make a general UCS-2 encoded or decoder you have to write all your code twice:

Unfortunately for UCS-2, Unicode outgrew two bytes. Sure, Unicode characters through U+FFFF (the “Basic Multilingual Plane”) can be encoded in UCS-2, and that’s enough sometimes. But if you want more Chinese characters, or Klingon, or the fancy Emojis you can’t use UCS-2.

The code point value is in the lower 10 bits of each surrogate pair, so we can apply a bit mask:

The decoder takes that result, shifts and OR s and adds 0x10000 to get the code point value.

That’s a basic a UTF-16 decoder. Naturally, it inherited the big-endian and little-endian variants from UCS-2, along with the necessary byte order mark.

UTF-16 does the job. But it feels like what you get when you chip away every objection until you find a compromise everyone can barely tolerate.

ASCII and UCS-2 are fixed width, which is easy to work with. But if you want to hold the whole range of Unicode with a fixed width you need four bytes, and that is UTF-32. Every code point, 4 bytes.

UTF-32 will be faster for some operations, so as a trade-off of space for time it has it’s place. But as a general-purpose encoding, it’s wasteful. For instance, ASCII characters are common in the real world, but each one wastes 25 bits in UTF-32.

It’s even worse than that. The largest assigned Unicode code point is U+10FFFF, which requires 21 bits. Consequently, there are at least 11 unused bits in every code point. That’s right, there’s always at least one completely unused byte in every UTF-32 encoded code point.

Just like the other multi-byte encodings, UTF-32 comes in big-endian and little-endian versions as well. One nice thing about UTF-32’s wasted space is that you don’t usually need a byte order mark. Let’s look at U+1F407 (:rabbit2:) again:

There’s a zero byte on one side or the other, so the decoder can find the byte order for any code point.

UTF-8 is another variable-length encoding. Each code point takes one to four bytes. ASCII characters (that is, Unicode code points below U+80) take just one byte. Every other byte in UTF-8 will have it’s high bit set ( b & 0x80 != 0 ).

For a multi-byte code point, the total number of bytes is encoded in the first byte, as the number of 1 bits before the first zero. Convert it to binary and it’s easy to see:

The bits after the length bits make up the beginning of the code point. Subsequent bytes always begin with a 1 and a 0 , followed by six bits of the value. Here’s the full scheme:

If you count the x s on the four-byte version you’ll find 21. Exactly enough to store the highest Unicode code point, 0x10FFFF. Here are some examples:

After the first byte, a decoder has to mask the low six bits of each byte, then shift it onto the code point value.

Here’s a Go decoder . That’s silly, of course, since Go has excellent support for UTF-8. It’s built-in strings are already UTF-8. Which shouldn’t be any wonder, since Ken Thompson designed UTF-8 with Rob Pike and then they both worked on Go .

Everyone has mostly settled on UTF-8 in the past few years. But I think it’s worth examining this decision. Let’s recap:

So fixed-width encodings are out. The only options left are either UTF-8 or UTF-16. Let’s compare.

Did you notice how every ASCII characters only take one byte? That means that ASCII documents are already UTF-8. That actually covers a lot of real-world text. The English front page of Wikipedia, for instance, 99% of characters are ASCII. The French version is still 98% ASCII, and even the Japanese version is 91% ASCII.

UTF-8 also never has a NULL byte. Which means this actually works on my computer:

If that doesn’t work, this definitely will:

Trying the same trick with UTF-16 and it won’t get past the first character:

It prints an “H” then quits. The \x00 is interpreted as the end of the string.

In fact, much of the C standard library ( strcmp , strlen ) works fine with UTF-8. Not so with UTF-16, you can’t embed the encoded bytes in 8-bit numbers. Your best bet is probably to convert it wide chars and use the wide versions of those functions.

But UTF-8 is read one byte. In fact, there’s no other way to do it. Consequently, there is no byte order to worry about. Here’s the UTF-8 version of the earlier program.

UTF-8 can be synchronized

A decoder can always tell where a code point starts in UTF-8. This is not the case for UTF-16.

Let’s say you want to fill your home with classic literature and decide to start with the WiFi:

iconv converts the text to UTF-16 and nc sends it via UDP multicast to all hosts on your home network (presumably over WiFi, because otherwise what’s the point?). On some other host on your network you can read it:

Or just grab a sample:

Anna Karenina uses the Cyrillic alphabet, and the Art of War is in ancient Chinese. There’s no telling what you’ll get. Here’s one sample:

Looks like we got Alice in Wonderland that time, since to is more likely than 琀漀 . But we didn’t tell iconv explicitly what byte order to use and there’s nothing in the data to tell us.

This begins with two new lines and Д , so we’re probably in Anna Karenina.

UTF-16 over UDP works better than I thought it would. I suspect that even-sized packet sizes keep the characters lined up. If it lost a byte everything would shift and we wouldn’t be able to tell where a code point begins.

Contrast this with a sampling of the UTF-8 version of the same stream:

Thanks for taking the time to read this. If you’re interested I put some text encoding code up on github:

There are better tools than these, probably with fewer bugs. But since I was just tinkering these are unconcerned with the real world. Which makes them fairly simple projects and hopefully easy to read. 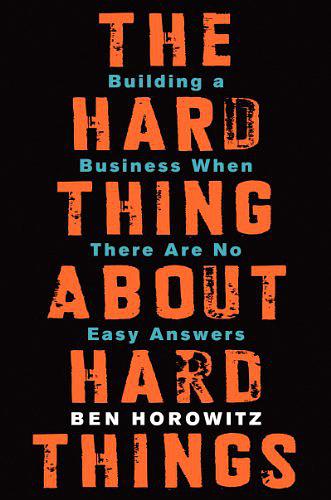 Ben Horowitz, cofounder of Andreessen Horowitz and one of Silicon Valley's most respected and experienced entrepreneurs, offers essential advice on building and running a startup—practical wisdom for ......一起来看看 《The Hard Thing About Hard Things》 这本书的介绍吧!