What Is Argmax in Machine Learning?

内容简介：Argmax is a mathematical function that you may encounter in applied machine learning.For example, you may see “This may be the first time that you encounter the argmax function and you may wonder what it is and how it works.

Argmax is a mathematical function that you may encounter in applied machine learning.

For example, you may see “ argmax ” or “ arg max ” used in a research paper used to describe an algorithm. You may also be instructed to use the argmax function in your algorithm implementation.

This may be the first time that you encounter the argmax function and you may wonder what it is and how it works.

In this tutorial, you will discover the argmax function and how it is used in machine learning.

After completing this tutorial, you will know: What Is argmax in Machine Learning?

This tutorial is divided into three parts; they are:

Argmax is a mathematical function.

It is typically applied to another function that takes an argument. For example, given a function g() that takes the argument x , the argmax operation of that function would be described as follows:

Consider the example where g(x) is calculated as the square of the x value and the domain or extent of input values ( x ) is limited to integers from 1 to 5:

We can intuitively see that the argmax for the function g(x) is 5.

Note that this is not the max() of the values returned from function. This would be 25.

It is also common to use the arg max function as an operation without brackets surrounding the target function. This is often how you will see the operation written and used in a research paper or textbook. For example:

How Is Argmax Used in Machine Learning?

The argmax function is used throughout the field of mathematics and machine learning.

Nevertheless, there are specific situations where you will see argmax used in applied machine learning and may need to implement it yourself.

The most common situation for using argmax that you will encounter in applied machine learning is in finding the index of an array that results in the largest value.

Recall that an array is a list or vector of numbers.

Often, a single class label prediction is required from a set of predicted probabilities for a multi-class classification problem.

Let’s make this concrete with an example.

Consider a multi-class classification problem with three classes: “ red “, “ blue ,” and “ green .” The class labels are mapped to integer values for modeling, as follows:

Each class label integer values maps to an index of a 3-element vector that may be predicted by a model specifying the likelihood that an example belongs to each class.

Consider a model has made one prediction for an input sample and predicted the following vector of probabilities:

We can intuitively see that in this case, the argmax of the vector of predicted probabilities (yhat) is 1, as the probability at array index 1 is the largest value.

We can then map this integer value back to a class label, which would be “ blue .”

How to Implement Argmax in Python

The argmax function can be implemented in Python for a given vector of numbers.

First, we can define a function called argmax() that enumerates a provided vector and returns the index with the largest value.

The complete example is listed below.

Running the example prints the argmax of our test data used in the previous section, which in this case is an index of 1.

Thankfully, there is a built-in version of the argmax() function provided with the NumPy library.

This is the version that you should use in practice.

The example below demonstrates the argmax() NumPy function on the same vector of probabilities.

Running the example prints an index of 1, as is expected.

It is more likely that you will have a collection of predicted probabilities for multiple samples.

This would be stored as a matrix with rows of predicted probabilities and each column representing a class label. The desired result of an argmax on this matrix would be a vector with one index (or class label integer) for each row of predictions.

This can be achieved with the argmax() NumPy function by setting the “ axis ” argument. By default, the argmax would be calculated for the entire matrix, returning a single number. Instead, we can set the axis value to 1 and calculate the argmax across the columns for each row of data.

The example below demonstrates this with a matrix of four rows of predicted probabilities for the three class labels.

Running the example first prints the shape of the matrix of predicted probabilities, confirming we have four rows with three columns per row.

The argmax of the matrix is then calculated and printed as a vector, showing four values. This is what we expect, where each row results in a single argmax value or index with the largest probability.

This section provides more resources on the topic if you are looking to go deeper.

In this tutorial, you discovered the argmax function and how it is used in machine learning.

Do you have any questions?

Ask your questions in the comments below and I will do my best to answer.

Get a Handle on Linear Algebra for Machine Learning! ...by writing lines of code in python

Discover how in my new Ebook:

Finally Understand the Mathematics of Data 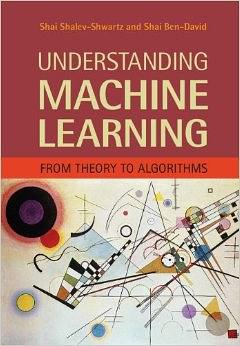 Machine learning is one of the fastest growing areas of computer science, with far-reaching applications. The aim of this textbook is to introduce machine learning, and the algorithmic paradigms it of......一起来看看 《Understanding Machine Learning》 这本书的介绍吧!